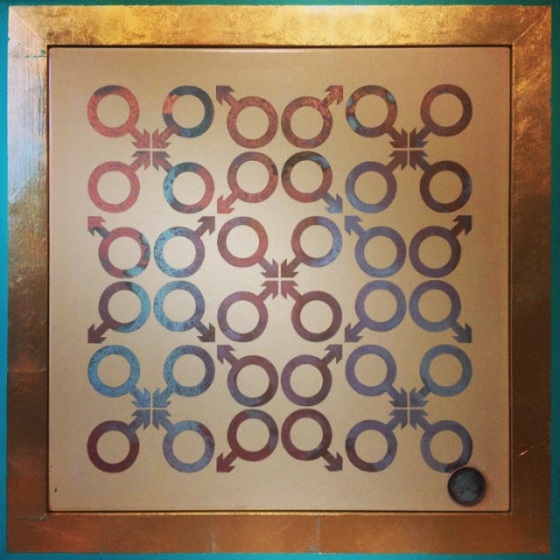 I was invited, along with 35 other artists to participate in the Art of Lustron Show at Tacocat collective in Grandview, Ohio, March 2014 by Columbus Artist Brian Reaume. The challenge of creating work for this exhibition was one I couldn’t resist. Each artist was given a Lustron panel (2’ x 2’ enamel-coated prefabricated steel) with which to artistically interpret in any way they saw fit.

Since the Lustron houses were produced in Ohio in the late 40s and 50s, I chose to narrow my concept to focus on the swirling propaganda of the virile, perfect man of those times, a stark contrast to the 40s and 50s woman (and I’d argue, present-day women) who (were/are) presented as submissive accouterments at best.

With that in mind, I selected the male gender symbol of Mars as the basis for the repeat pattern painted in copper, harkening to that of many of the geometric and clean midcentury modern textile styles. I then urinated on the panel resulting in the beautiful and varied blue patina, a symbolic reclaiming of ownership and not so subtle insult to our patriarchal society. The 50s era swimming pool blue and gold leaf on the frame round out the tongue-in-cheek snub, hence the name: The Pissing Contest.

Read more about Lustron Houses, the exhibition and find the other Art of Lustron artists on the event page here. 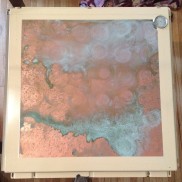